END_OF_DOCUMENT_TOKEN_TO_BE_REPLACED

Mexico’s Secretary of Economy Bruno Ferrari deposited his country’s instrument of accession to the Madrid Protocol for the International Registration of Marks with WIPO Director General Francis Gurry on November 19, 2012, bringing the total number of members of the international trademark system to 89.  The treaty will enter into force with respect to Mexico on February 19, 2013. The Madrid System for the International Registration of Marks (Madrid system) offers trademark owners a cost effective, user friendly and streamlined means of protecting and managing their trademark portfolio internationally. 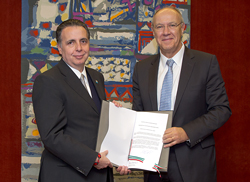 Mr. Gurry welcomed Mexico’s accession, noting that “Mexico is the third country in the Latin American region to join the Madrid trademark filing system.  Its accession to the Madrid Protocol will assist enterprises in Mexico that are seeking to expand their markets overseas.  It will also assist WIPO in achieving its objective of transforming the Madrid System into a system with truly global reach.” He also congratulated Mexico’s Institute of Industrial Property (IMPI) and its Director General, Dr. Rodrigo Roque, for putting in place state-of-the-art practices that are supported by a modern information technology infrastructure and by competent human resources.  Mr. Gurry said that “Mexico’s legal and institutional framework will guarantee the successful implementation of the Madrid Protocol in Mexico,” noting that IMPI is among the top fifteen IP offices receiving the highest number of trademark applications worldwide.

Mr. Ferrari said that “brand owners in Mexico stand to greatly benefit from the Madrid Protocol.”  He observed that Mexico is the 11th largest world exporter and has the highest value of exports in Latin America, 80% of which are manufactured goods. In relation to Mexico’s GDP, it is the third largest exporter in the world of high tech products.  It is also  a G-20 economy with a trade volume of over 700 billion dollars in 2011.  This increased by 20% between 2008 and 2011, in spite of the global economic downturn.

The Minister said that “Mexico has one of the largest networks of trade agreements in the world and it is also seeking to increase and diversify its trade associations.  In this framework, the Madrid Protocol is a logical component which will strengthen the expanding trade policies implemented by the Mexican government. Since this extended network of trade agreements includes many Latin American countries, Mexico trusts that many more countries of the region will soon join this very useful tool; particularly, as a means to foster regional and global economic growth, as it has been promoted by Mexico during its G-20 Presidency in 2012.”

This year, the Philippines, Colombia, New Zealand and Mexico have acceded to the Madrid system, resulting in a geographical expansion of the system.

The Madrid system is equally attractive to large businesses, as to small and medium-sized enterprises, which are the largest users of the system.  In the midst of current global economic conditions, the Madrid system has shown signs of strength, which are evidence of its known advantages. 2011 saw the highest number of international trademark applications ever filed under the Madrid system, with 42,270 applications, or a 6.5 % increase compared to 2010.  Moreover, from January to October, 2012, the number of international applications filed has increased by 4.4 per cent, compared to the same period last year. END_OF_DOCUMENT_TOKEN_TO_BE_REPLACED